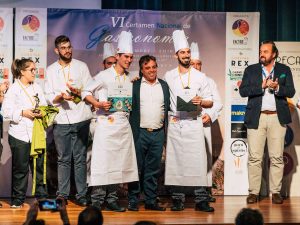 The sixth edition of the “National Gastronomy Contest FACYRE”, held in Palma de Mallorca, has revealed the great gastronomic talent that reigns in our country with a close competition for autonomous communities in which Aragon and Corvina REX excelled like never before.

Thus, this year the contest had two main ingredients for the Cooks category: Corvina Rex, by the Frescamar company, and rabbit meat, through the Interprofessional Organization to promote the cuniculture sector (INTERCUN).

Ingredients that the Carcas Armingol brothers, from the Casa Pedro Zaragoza restaurant, have handled with great ability to win the first prize.

In addition to the main ingredients of the two dishes that each team had to prepare, there have been two complementary ingredients also required.

In the case of the fish dish, chefs have had to use broccoli, while, for the meat dish, sobrassada (Majorcan sausage) has been the secondary ingredient; a typical product of the islands where the competition has been held.

With these premises and great technique and creativity, the Aragon representative team has prepared a grilled Corvina REX with roast chicken broth and broccoli ravioli that has captivated the jury.

Aragon repeats success because, in the last edition, it was also the community that deserved the highest award of this prestigious contest promoted by the Federation of Cooks and Bakers of Spain (FACYRE).

The second and third positions have been obtained by the Balearic and Canary Islands, respectively.

Celebrities from the gastronomic world

EThe event, which has had this year with the collaboration of the Association of Cooks Established in the Balearic Islands (ASCAIB), has been held at the premises of the Escola d’Hoteleria de les Illes Balears (EHIB), located in Palma de Mallorca.

The president of the association, chef Koldo Royo, has hosted as master of ceremonies together with the chef Pepa Muñoz – who was premiering as president of FACYRE – and journalist José Ribagorda, among others.