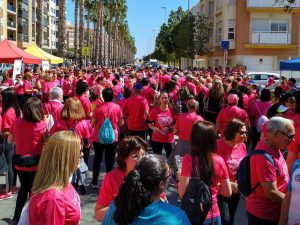 Corvina REX, the Department of Equality of the Burriana City Council, the Le Cadó Foundation and the most supportive companies and neighbors have once again become the ingredients of a day devoted to the fight against breast cancer.

Again, the traditional “Cursa de la Dona” has had its fourth edition with the collaboration of Frescamar Alimentación and its flagship product: CORVINA REX.

A giant empanada prepared by the chef Kike Peris with a puff pastry filled with CORVINA REX and vegetables has been part of the refreshment with which they have received the more than 1,300 runners.

From the Municipal Pool of Burriana the human mass of pink color, provided by the commemorative t-shirt of the test and symbol of the fight against breast cancer, has traveled the 5 kilometers in a solidary act.

The profits raised, more than 5,000 euros, will go to research projects being carried out in the Provincial Hospital of Castellón, as the one that seeks to decipher the hereditary genome of breast cancer.

All this through the Le Cadó Foundation, responsible for the coordination of this and other solidarity events held in the province of Castellón with the same purpose.

A shirt with a message of hope

The design of the commemorative shirt worn by the numerous runners and that has also been reflected in the official poster is the work of the illustrator María Griñó.

The artist has been very excited by the commission and has explained that with her design she has wanted to represent women and their fight against cancer, symbolized through the bonds that they form with their own hair, as well as the perpetuation of life in the form of a heart that wraps everything.