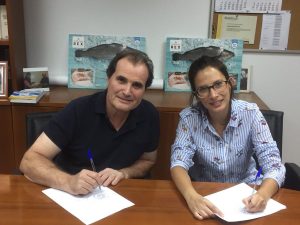 Frescamar Alimentación and the Wholesalers Guild of the Mercabarna Central Fish Market have signed a collaboration agreement to promote, with Corvina REX, an increase consumption of fish among schoolchildren.

Thus, through the Interactive Fish Center (CIP) and the educational program “Creix amb el Peix” they will make known to the youngest the different phases that the fish goes through from its fishing in the sea to the table.

All this underlining its nutritional contribution and the innumerable health benefits to consume it.

The Interactive Fish Center was created in 2010 by the Mercabarna Central Fish Market Wholesale Guild with the collaboration of Mercabarna and other sponsors and collaborators.

At the same time, “Creix amb el Peix” was born; an educational program promoted by the Guild and aimed at schoolchildren between 8 and 11 years old that has already trained more than 50,000 students since its stablished.

The program includes visits to the CIP and to companies dedicated to fish handling as well as a final workshop on food and a meal starring by fish.

Thanks this, 25% of the families of the participating children have increased the consumption of fish both in quantity and variety of species, as revealed by the surveys carried out to parents.

The agreement has been signed by the Marketing Director of Frescamar, Erika Moya, and the president of the Guild, Ángel Máñez.