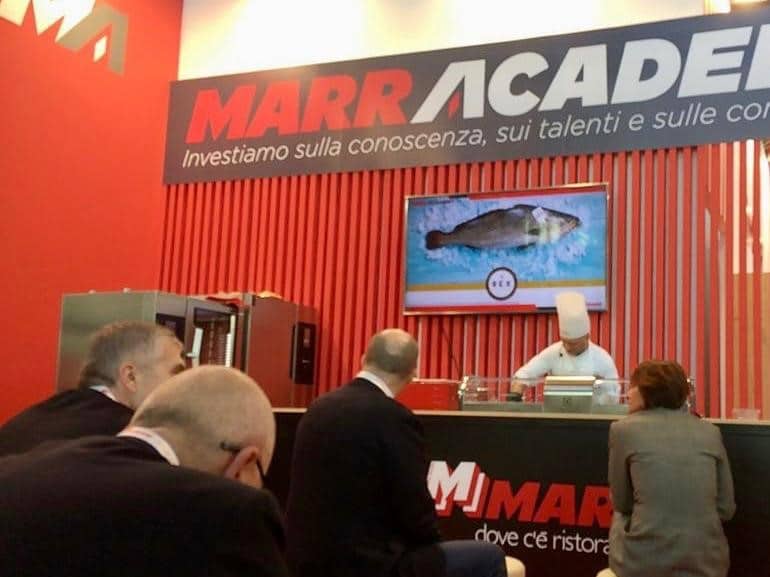 The Beer & Food Attraction, an exhibition aimed at the HORECA channel and held in Rimini (Italy), was attended in its latest edition by Corvina REX through its distributor MARR.

The company, specialized in the food service channel, participated as an exhibitor in this event that brings together the latest worldwide trends in consumption outside the home, and did so by hosting a complete programme of activities at its stand.

Among the actions held in its exhibition space, we highlight the showcookings starring Corvina REX which were followed by the tasting of the elaborations by MARR customers and their own sales team.

During the first day of this event, the live kitchen exhibition was preceded by an interesting presentation of the product and the food group behind the brand, Andromeda Group.

Corvina REX in the Mediterranean style, prepared on the grill and sided by dried tomatoes and olives, was the recipe chosen for this action with which it has started its programme while, during the rest of the days, other proposals like baked corvina with potatoes and fennel could be savoured.

These dishes, prepared by MARR´s chef Sergio Ferrarini and praised by the attendees, have revealed the culinary versatility of Corvina REX and its delicious flavour.

With 45 years of experience, MARR leads the specialized distribution of products for the food service channel in Italy, with a catalog of more than 15,000 references of fish, meat, cheese, fruit, vegetables and drinks, among others.