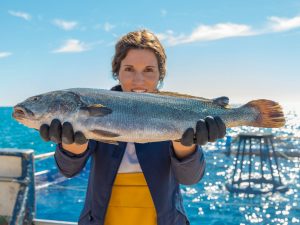 Carrefour has selected to Frescamar Alimentación and its Corvina REX to expand its offer of fresh products marketed under its own brand “Calidad y Origen”, thus integrating the Corvina among the species it offers within the fish market area.

The philosophy behind this careful selection of products done by the French chain is synthesized in the slogan “Produce well to eat better.”

A spirit that is reflected in five pillars: the recovery of the original flavor of food, respect for the authenticity of products, the protection of both food safety and the environment and the guarantee of the best of good value for money.

At the level of social responsibility, Carrefour requires the producer not only to respect the environment in terms of sustainability, minimizing the environmental impact of its activity, but a strong commitment to animal welfare.

In this regard, the company Frescamar Alimentación has since 2015 the “Friend of the Sea” certification.

The new Corvinas CyO (Calidad y Origen) have an identifying custom seal and are offered both in whole and in fillets.

Carrefour contemplates a campaign to inform its wide clientele about the CyO family with informative signage and tastings at point of sale, among other actions.

All this is integrated into its ambitious program “Act For Food” which includes, among its objectives, the promotion of healthy diet.

The Corvina is a traditional species of the Mediterranean Sea, recovered thanks to aquaculture, which Frescamar Alimentación offers to the channel in just 24/48 hours from fishing.

Thus, Corvina REX and now also the new Corvina CyO meet all the requirements of a fresh and traditional product that, in addition, is obtained respecting the environment and ensuring animal welfare.