02 May Corvina REX featured at the Makro Foodservice Fair activities 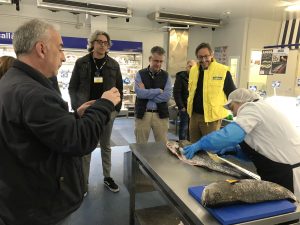 Within the program that Makro develops every year on the occasion of its Foodservice Fair, Corvina REX has offered a complete workshop dedicated to the species.

The activity included a practical cutting demonstration in the fish counter area and a brief speech about aquaculture in general and also on the particularities of the meagre.

After the masterclass, a tasting of the product was given with a refreshing ceviche prepared by Laura Castelblanque, a Gastronomy & Culinary Management Campus (GASMA) student, grantee by Frescamar Alimentación.

All this was held at the Makro Barcelona Zona Franca store, where Corvina REX offered a showcooking a couple of years ago on the occasion of its inauguration (See news REX participates on the new MAKRO Zona Franca inauguration).

Among the audience both, members of the Makro commercial team and customers, were found. They all followed the contents taught and demonstrations carefully.

The German distribution group offers training and inspiration days for its customers in order to support these professionals of the Horeca channel in their respective businesses year after year.