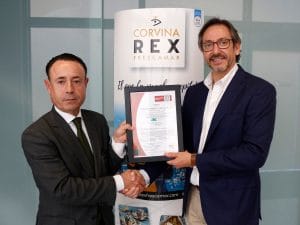 Corvina REX has been awarded the ASC (Aquaculture Stewardship Council) certification, thus becoming the first meagre that holds this important recognition in Spain.

The requirements set out in this standard are perfectly aligned with the values of both the company, Frescamar, and the aquaculture group to which it belongs: Andromeda Seafood.

These company values are linked, among others, to responsible aquaculture and sustainability and have already earned them other awards in this area such as the Friend of the Sea certificate.

Bureau Veritas, world leader in its field, has carried out the necessary verification, inspection and certification work that has led to granting Frescamar this certificate.

Thus, this important milestone crystallised in an event held at Frescamar facilities in La Vall d´Uixó (Castellón) which was attended by Patricio Calatayud, Regional Director of the Eastern Zone at Bureau Veritas.

ASC was born in 2010 and today, almost a decade later, it represents the international standard of the greatest worldwide recognition.

It is rooted in the work developed by the international nature conservation organization World Wildlife Fund (WWF) under the program The Sustainable Trade Initiative (IDF).

Its goal was to reduce the environmental and social impact of aquaculture worldwide by making the sector sustainable through responsible practices.

Corvina REX joins this work, becoming the first fish of its kind in Spain to obtain ASC certification and reinforcing – even more – its commitment to the environment.