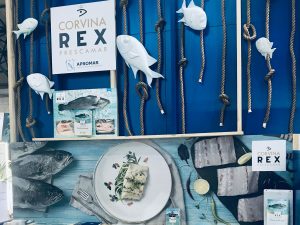 Corvina REX has actively participated in the recent edition of the International Frozen Sea Products Fair, organized by CONXEMAR in the Galician city of Vigo.

A reference meeting at European level that brings together wholesalers, importers, exporters, manufacturers and distributors, among others, every year, and in which Corvina REX has been present at the hands of the Ministry of Agriculture, Fisheries and Food.

Thus, from its stand, the food company has offered two showcookings to the public of the fair, featuring two tasty recipes: Ceviche de Corvina REX and Corvina REX confit with homemade pickles and Galician sauce.

Some dishes made by chef Paco Pajares that have been tasted by attendees after their live production.

The Vigo Fair Institute (IFEVI) has successfully welcomed this twenty-first edition of the contest organized by CONXEMAR that has surpassed the previous ones both in number of exhibitors and visitors.

CONXEMAR is the Spanish Association of Wholesalers, Importers, Transformers and Exporters of Fishery and Aquaculture Products and has more than two hundred associates.

Companies that represent the frozen sector of the country and add more than 7.5 billion euros of annual turnover and about 15,500 jobs.

The Association integrates among its objectives to strengthen international competitiveness and visibility of this sector.

Given the success of its annual fair, the organization plans to expand the area devoted to this professional meeting for the next editions.