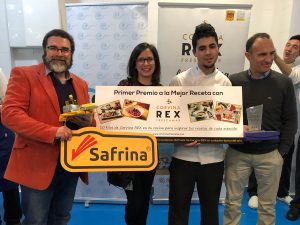 Mediterranean Advanced School of Hospitality (CSHM) begins the consolidation of its culinary contest “Promotion of Natural Product” with a second edition in which Corvina REX is once again the main character.

Safrina, Montesa or Gastraval are some of the companies that, like Frescamar, have liked to support these sessions, where the main topic has been, again the recipe contest.

In this edition, each participant has competed with two creations, one more traditional and another one made to give free rein to the participant’s imagination, allow them to use any culinary technique.

All recipes -traditional and avant-garde- have fight for raising one of the trophies: three prizes and a second place to the innovation, that this year also sponsored Corvina REX, the main ingredient of the dishes presented.

A large jury formed by Chef Kike Peris; Frescamar Marketing Manager, Erika Moya; Esther Cerveró and Tomás Mayordomo from Socarrat Studio and Vicente Gil from Las Provincias newspaper, among others, have meticulously assessed each of the candidate recipes based on various parameters.

The first prize went to Andrés Rengel, who also won last edition of this contest, thanks to his Corvina REX Cap i Pota.

The second award-winning recipe has been the Salting Corvina REX with hints of Saffron and Citrus air prepared by the student Lucas Hernández.

An aromatic Corvina REX in Provencal Herbs Crust has won the third place thanks to Adrián Tomás, while the second prize went to Willian Martínez and his Corvina REX in Tempura with Coco and Saffron.

The culinary session has started with a Corvina REX masterclass which has included, as usual, a theoretical introduction about the aquaculture and the species, and also a practical section consisting of a cutting-up show.

Another interesting masterclass offered by Chef Kike Peris has completed the activity program while the classroom was impregnated by an exquisite black truffle aroma, which was used to prepare an original recipe of Corvina REX.