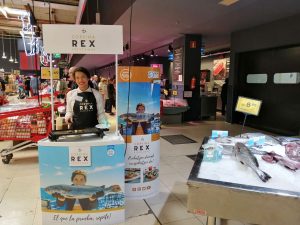 A selection of Eroski centers have been the scene of the new initiative “Month of Corvina REX” that has integrated different actions directed to the final consumer and also to the professionals of the Biscayan firm.

In order to achieve greater knowledge of the species and the brand, as well as increase sales, tastings have been made at the point of sale and information material has been provided in strategic areas.

Thus, the fishmongering area of the selected stores has counted with recipes that offer varied proposals to enjoy Corvina REX, stoppers with its image, signage on the turn tickets dispensers present in the area and dispensers totems -designed ad hoc- with informative brochures to bring closer the species to the consumer.

On the other hand, the screens of the cash register line of the mentioned centers have offered during the whole month the image of Corvina REX in its screens.

Tasting of Corvina REX at point of sale

The main action has absolutely been the tasting, that, carried out by a promoter that from a corporate stand of the brand, has offered rations grilled of Corvina REX cooked at the moment.

A taste of Corvina REX accompanied by a delicious celery ball sauce, has delighted Eroski´s customers.

After the tasting, the promoter has delivered an informative leaflet and has collected in a brief questionnaire some aspects of interest to know more about the current positioning of Corvina REX and consumer habits.

The social network Facebook has been another of the tools used to disseminate this campaign that has been a success and that the aquaculture company plans to extend to other chains inside and outside the country.

The campaign “Month of Corvina REX” has also integrated an action for the own professionals of Eroski, offering them a tasting of fillets of Corvina REX that has been celebrated in the central headquarters of the group located in the Basque Country.