Frescamar stands with the “Company of the Year” award

Home | Frescamar stands with the “Company of the Year” award

06 May Frescamar stands with the “Company of the Year” award 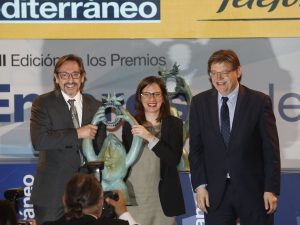 The leading newspaper in the province of Castellón, “Mediterráneo”, has celebrated its traditional annual gala awarding in this occasion the work and the projection of Frescamar Alimentación, trading company of Corvina REX.

The event celebrated at the Auditorium of Castellón, was attended by a broad representation of the business and associative network of Castellón with more than 400 guests.

At the institutional level, have been present the President of the Generalitat, Ximo Puig, as well as Consellers Vicent Soler, Vicent Marzá and Ana Barcelo, from the Treasury, Education and Health portfolios, respectively.

Ximo Puig delivers the award, work of Ripollés, to Frescamar

The president of the Generalitat, Ximo Puig, has been responsible for delivering the award, an sculpture by the prestigious artist from Castellón, Ripollés, to the people of Frescamar.

Puig has applauded Frescamar’s contribution to the development of aquaculture and has highlighted its international expansion, with commercial missions such as the one he led a few years ago to Canada in search of agreements to enter the American market.

Eduardo Soler, director of Quality of the company, and Erika Moya, its director of Marketing, have collected the award with great satisfaction. The first of them thanked the recognition of so many years of work, as a result of which today Frescamar is a leading company in its sector.

An incessant activity with a promising future in which they contemplate continuing to grow and invest and over which Soler has highlighted the support of the Administration as essential to place the company in the place it currently occupies.

The great night of Castellón’s economy

During the evening in which Frescamar Alimentación has won the highest award of the “Company of the Year” award, other winners in different categories have also seen their work recognized:

-Rafael Benavent in the Business Career category as founder of Keraben, a company dedicated to porcelain flooring and cladding.

-Equipe Cerámicas that has seen its Quality recognized.

-In Environment and Social Responsibility, the outstanding company has been Cuinatur.

-Ambulances CSA has been awarded in the category of Human Resources.

-Finally, the award to the Young Company has fallen to Integra Solutions, specialist in design.

From Frescamar Alimentación, we congratulate all the winners in this 22nd edition of the Best Company Awards, while thanking the jury (CaixaBank, Ministry of Agriculture, etc.) for the fact that they have opted for our candidacy.