Great success at the I REXperience edition

Home | Great success at the I REXperience edition 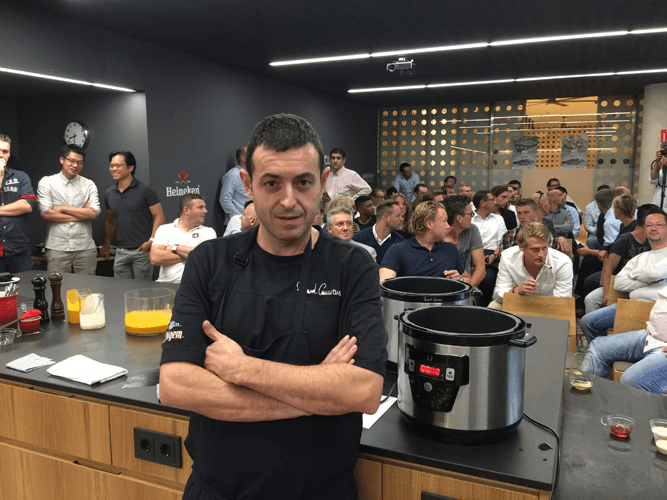 02 Dec Great success at the I REXperience edition

Corvina REX Frescamar has gathered over one hundred Dutch chefs during the celebration of its first gastronomic experience edition “REXperience”.

Three working days were organized under the concept “Cook with Corvina” by the aquaculture Company Frescamar (member of Andromeda Group) together with its Dutch distributor Jan Van As.

The chefs, who came from Dutch hotels and restaurants and gathered more than ten Michelin stars, enjoyed different activities crowned by a show cooking held by Ricard Camarena at his restaurant at Mercado de Colón in Valencia.

The group of cooks -among which there were several Master Chefs- visited Frescamar’s marine farms and processing plant located in Burriana (Castellón), enjoyed a lunch integrated by a variety of dishes elaborated with Corvina REX and performed a tapas bike tour around different emblematic hostelry sites throughout the city of Valencia.

Establishments such as Casa Montaña where its manager, Alejandro García, shared with the group the cellar’s history and offered them a tasting of some of the most typical products.

Authorities such as Burriana’s major, town where the company’s facilities are located; the Fishery city councilor of the town hall; the General Manager of Agriculture Livestock farming and Fishing from Generalitat Valenciana and the Netherlands Consul at Valencia, did not want to miss this meeting and attended some of the activities.

This gastronomic experience, greatly enjoyed by these Dutch cook’s representatives, will surely serve as an inspiration to create new and tasty corvina recipes.

Corvina REX Frescamar, Frescamar Alimentación’s flagship product, is the first existing national trademark, born from a private scope and un-referred to its origin.

It is a very versatile white fish of which cooking experts emphasize its delicate flavor and the lightness of its meats’ texture.

It is a white fish with superb attributes that achieves its maximum “state of the art” in the CORVINA REX FRESCAMAR.