New edition of Mitic Bike with the support of REX

Home | New edition of Mitic Bike with the support of REX 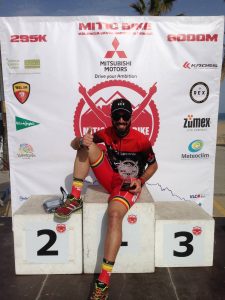 The second edition of Mitic Bike consolidates this sports competition inspired by a legendary journey that links Valencia with the Javalambre Peak during three different stages.

A competition that Frescamar and its flagship product, Corvina REX, continue to support through its sponsorship.

The most flavorful part of this collaboration is done in kind, making REX the provisioning main ingredient.

Thus, El Toro, a village located at Castellón province, has been again this year one of the points in which cyclists have been able to recover strength thanks to the tasty Corvina REX pasty elaborated by the chef Kike Peris that was also seasoned with oil from the cooperative of Jérica.

At more than 1,500 meters high, this refreshment becomes a key point for participants who left on Friday April 20th from Ciudad de las Artes y las Ciencias in Valencia and returned on Sunday 22nd to the city entering the Beach of the Patacona.

During these three intense days, they reached the Peak of Javalambre and spent the night in Alcublas and Manzanera, finding sun, snow and rain through the cliffs, forests, rivers and dunes included in the route.

The winners of this year were Adrián Escrig and Celia Ruiz, as male and female individual winners; the couple formed by Emilio Santos and Xavi Calaf, winners in the couple’s category (marking the best time of the two stages combined with a total time of 14 hours and 40 minutes) and Juan María Jiménez, winner in the Queen Stage category.

Upon arrival at Patacona Beach, the fans’ warmth awaited them, as well as a complete refreshment center where a marinated Corvina REX pasta salad was prepared by Kike Peris, the event’s official chef.

Both, the winners and all the participants enjoyed this well-deserved snack that was completed with other typical products such as freshly squeezed orange juice courtesy of Zumex or fresh horchata from Panach, a name strongly linked to the cultivation of groundnut, together to an assortment of sausages that represented the Teruel gastronomy, municipality through which the sporting event also runs until reaching the Javalambre Peak.

The sports clinic Ypsilon, on the other hand, provided the event with a set of stretchers and physiotherapists to offer a post-goal massage to the participants.

Mitsubishi, València Turisme, El Corte Inglés, Bicicletas Belga, Mediolanum or Decathlon are some of the companies that, together with Frescamar Alimentación, have given their support to the event that has been a total success in terms of participation.