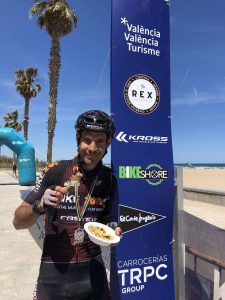 Mitic Bike has completed its third edition and, once again, Corvina REX has been side by side with the cyclists to help them regain strength at the refreshment area and side by side whit the organizers, sponsoring the event.

A sponsorship based on both economic and in-kind contribution that, along with the rest of the brands that sponsor the competition, is managing to place mountain biking as one of the top sports.

The Mitic Bike competition is already considered one of the toughest and most exciting of the MTB calendar. A hardness that is not at odds with enjoyment and even less with beauty because, during the three stages that comprise it, the competitor travels through impressive places of two autonomous communities.

Thus, the most beautiful corners of the coast and the interior of the Valencian Community (Valencia and Castellón) and Teruel form the scene of this competition that adds almost 300 kilometers and 6,000 meters of accumulated positive unevenness difference.

Father and son winners in the team’s category

In this new edition, the absolute winner has been Joseba Leon from Biscay, while the Valencian triathlete Mª José Martínez Maroto has been the winner in the female category.

In team’s category, the MP Neocomposites formed by Manuel Pastor Herrero and Manuel Pastor Navarro-father and son-have been the winners.

All of them, as well as the winners of the rest of the categories and other competitors, have been able to recover their strength after ascending to the summit of Javalambre peak, at more than 2,000 meters above sea level, thanks to the tasty Pie of Corvina Rex with vegetables prepared by the official Chef of the competition, Kike Peris.

At the goal, located on the Valencian beach of “La Patacona”, Corvina REX has also been the protagonist of the refreshment area. On this occasion, as the main ingredient of a refreshing pasta salad.